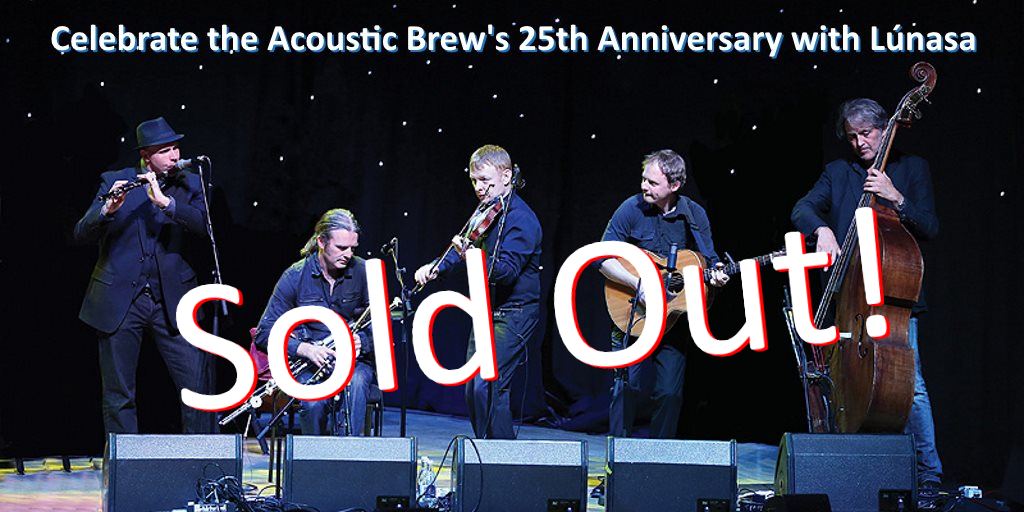 With the Lúnasa show, the Acoustic Brew will be celebrating 25 years of bringing quality, affordable live music to State College. Show number 1 was on February 22, 1992 and featured Simple Gifts with Kevin Morrissey opening. We're still planning, so check back for details or sign up for the brewlist to get all the latest info in your inbox.

Lúnasa is internationally acknowledged as being the finest traditional Irish instrumental outfit of recent times. They are renowned for their stunning shows honed by superb musicianship and a constant touring cycle. They have performed over 1,500 shows across 36 countries since the band formed in 1997. The band has appeared at internationally renowned venues such as The Hollywood Bowl, National Concert Hall (Dublin), Sydney Opera House and Moscow International House of Music. They have been invited to appear at the White House, and now they’re coming to the Acoustic Brew.

Their inventive arrangements and bass driven grooves have steered Irish acoustic music into surprising new territory. Their recordings have been hailed as some of the best and most important world music albums anywhere, while their blend of intelligence, innovation, virtuosity, and passion has brought them to the forefront of Celtic music.

“Maintaining the unique, intimate qualities of a musical tradition while at the same time meeting and fulfilling the demands of the contemporary music world is a difficult juxtaposition to achieve, yet Lúnasa have managed to accomplish exactly that.” – Kevin Burke