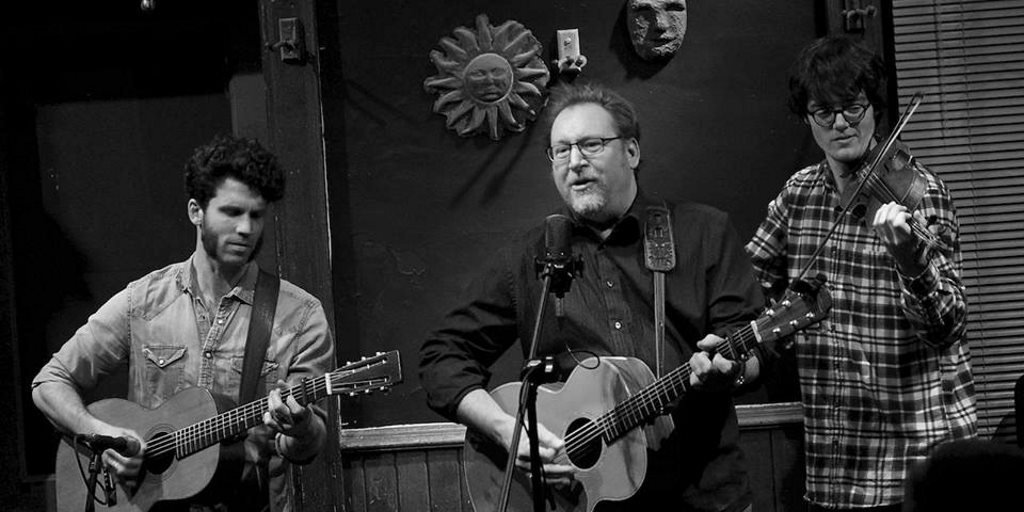 It’s a rare treat that The Tall Trees get to tour together as members of the band have their own successful music careers in full swing. However, when they do play together, it’s magic. The collaboration of noted folk songwriters Tim Grimm and Ben Bedford is unparalleled. With Diederik van Wassenaer on fiddle, the group creates a beautiful blend of tunes.

Tim Grimm has toured and recorded with his friend, Ramblin’ Jack Elliott, appeared with Harrison Ford in the film Clear and Present Danger, and has shared the stage with writer and poet Wendell Berry. His recording, The Back Fields was named “Best Americana Album” in the 2006 Just Plain Folks Music Awards in Los Angeles (the largest and most diverse music awards in the world). Named 2000’s “BEST DISCOVERY in Roots/Americana Music” by The Chicago Sun-Times, and “2004 MALE ARTIST of The Year” by the Freeform American Roots DJs, his songs and performances have established him as a unique voice in Americana music.

Ben Bedford delivers intriguing sketches of America, its individuals, their victories and their struggles. Poignant, but never sentimental, Bedford’s portrait-like songs capture the vitality of his characters and draw the listener deep into the narratives. With three albums to his credit, Bedford’s songs tackle scenarios including homelessness, the plight of a Confederate soldier’s wife during the American Civil War, the aerial triumphs of Amelia Earhart, the life of Jack London, the murder of Emmett Till in 1955, John the Baptist, the poet Vachel Lindsay and even the 1973 standoff between members of The American Indian Movement and federal agents on the Pine Ridge Reservation. Often drawing upon history, Bedford’s songs have a strong sense of time and place. The songs are rich in sensory detail which allows the listener to hear, see and feel each narrative.